The AccoLade and Souad Massi: Muslim Women and Music 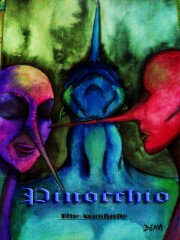 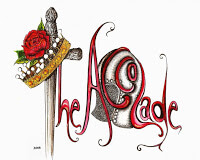 Many of you may have heard about this already, but NPR and The New York Times have both run stories about The AccoLade, a all-female rock band from Jeddah, Saudi Arabia (you can listen to the NPR radio spot here).

The three college students posted the tune "Pinocchio" on facebook and myspace and at first, only had a couple dozen fans, but now they have over two thousand.

They do not play live shows or share their full names, nor to they post images of themselves on the internet out of respect for their religion. The NPR story states that "cultivating a modest and somewhat anonymous identity online lets them thrive in this strict society." Instead they interact with their fans on facebook and myspace and share original drawing and paintings to represent themselves (see the above images).

Dina, Dareen, Amjad and Lamia, all college students between the ages of 19 and 21 have received a wave of international support as well as criticism for being female and playing in a rock band. The ladies state on their facebook page (with a few edits to bridge the language gap):

Anyone in this world can play, hear and create music no matter what their gender is or nationality, we are making music and we would appreciate it if the comments are only about our music, lyrics, paintings, where talk about our song, or how good/bad our song is…and omit anything that is irrelevant or inappropriate .

And by the way we are not facing any problems with anyone, and we are satisfied with what we are doing and the way we provide our song to you ... as we said before we are doing this for fun only and we respect our country, culture and traditions …we’ll continue our music without contradicting them…

Read an interview with them here (scroll all the way down).


I am so impressed with these women and their courage to live and make music within the system, even in a city like Jidda, by far the most cosmopolitan city in Saudi Arabia. It got me thinking about other female Muslim musicians and also how the internet is really revolutionizing and changing the world that we live in. It as has made things possible for women like The AccoLade to do what they love and share it with others.

Another woman who comes to mind is Souad Massi, an Algerian singer/songwriter who started playing as a teenager and was immensely influenced by American roots music, flamenco and rock bands like Led Zeppelin and U2. In the 1990s she joined an Algerian hard rock band called Atakor, but because of the political climate (civil war), political lyrics and growing popularity became a public target. Massi tried disguising herself by cutting her hair and dressing in male clothing. But despite these efforts, she began to receive death threats, so she left the band and moved to Paris in 1999.

Massi, finally found massive success in her solo career in Europe. This is a clip of a gorgeous performance in Brazil of the tune "Yemma," a song for her mother.

From the research I've done online, it looks like she never moved back to Algeria. I also can't tell how much her gender effected the reaction she got from her involvement in Atakor. But I do know that women and musical performance do not mix well in the Islamic world. I am doing further research on why and what women are and are no allowed to do. (For example, women are allowed to perform for other women, which is the case in the Bedouin community of the Sinai Desert between Israel in Egypt.)


If you have any information on this topic, I would love to hear it. I am very curious. (I found this too from Muslimah Media Watch, very interesting how the media is framing AccoLade in terms of it's political presence more than it's musical attributes.)

I also think it's fascinating that a band, in this age of the world wide web, no matter who or where they are, can be successful and have fans, without ever leaving their homes; ESPECIALLY if they don't want or need to make money from their music. They don't need record labels, or CDs or managers. Just an audio recording and an internet connection.

What is interesting to me about what these women are doing is that they have figured out a way to express themselves, through their music, in a way that is not outright forbidden by their religion. This actually gives them a broader appeal, allows moderates within their country/religion to perhaps feel more comfortable openly listening to women singing and performing.

That's a really good point. One other thing that I was thinking about was that when women are musicians, their physical appearance/image is often as important as the music itself.

AccoLade has become popular without images of themselves out there (although there are mental images of them in the way the reporters describe them, the wear modern clothing under their open "robes" and have piercings, which are very trendy with young people in Jeddah). In a way, the romantic image of AccoLade and their artwork used to represent them, is more powerful than a real one on the page/screen.

Hi everybody
Today I will introduce to everyone the top ringtone of the year 2018. Quality ringtone. Forbearance. You can listen and leave a feeling for my ringtone. You can find and search for other ringtones when visiting my homepage here: https://ringtonesmobile.net/

Top 5 ringtones installed most in 2018, You can install by following these instructions:

Your review will help me improve my ringtone better. These are free ringtones for everyone and you can share it with the world. Wish you have the best ringtone for your cell phone. Thank you!