Stevie with one of his insanely hot backup singers.

Another year, another Outside Lands Festival in Golden Gate Park. I (happily, these things are tiring) didn't get there all three days, but was surprised with a VIP ticket to Sunday, which was the BEST day to be there. Two words: STEVIE WONDER.

But first things first. We got there early to see this Italian dude Jovanotti, who was SUPER fun. His fabulously hooky song "Tutto L'Amore Che Ho" was featured on the festival's site and I just had to  see what his deal was.


Turns out this guy can rock a crowd, hard. His energy was infectious, reminding me of Manu Chao, like this video...


Toward the end Jovanotti popped down into the crowd (which was WAY smaller than what he usually plays for in Europe, I'm sure) and sang to us. Not bad for high noon.  I enjoyed seeing the sort of folks who knew who he was, and would get to the festival so early to see him.

"We usually play for three hours" Jovanotti said in the cutest Italian accent, "So we're trying to give you the highlights in forty minutes!

After some fried pickes from the Fabulous Frickle Brothers, we came across Dr. Flotsam's Hell Brew Revue, returning bigger and better than last year. "It's an extraordinary setup, envisioned and handmade by an artist named Mike Shine and his posse of Carny Bastards to evoke a family carnival ambience." (SFWeelkly blog)

And guess who was playing? The Brother's Comatose (a fabulous local bluegrass band)! And I later found out that's where The California Honeydrops and Tumbleweed Wanderers had been playing all weekend, to pretty large crows! I'm glad that local bands got to play for the throngs in such a fun and quirky spot.

Then we caught some of Caveman's brooding set, who I became familiar with after NPR featured them on one of their Tiny Desk Concerts. I love that their guitars are made by one of the band members and I love that dude's outfit. (Yes, I had some fun with the color saturation.) 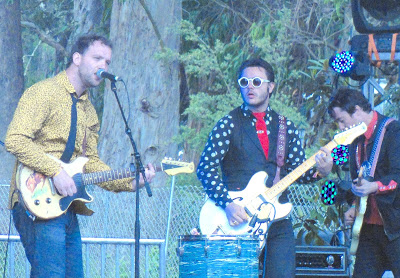 And then it was onto Amadou & Mariam. The other highlight of the day for me. I've been wanting to see this Malian couple perform live since I first heard about them in grad school. My afropop ensemble covered a couple of their tunes (with varying success, this music is complicated!) And they did not disappoint!


And then it was onto Mr. Stevie Wonder. HOLY SHIT. It was all I could have wanted. I mean the dude walked out onto stage with a freaking KEYTAR. He played all the hits, even the corny ones. That's OK Stevie, we'll let that go, because you can do whatever you want. Really WHATEVER you want. You're Stevie Wonder.

He really did whatever he wanted. It was pretty obvious that the band was pretty used to Stevie changing the order of the setlist, calling out keys and songs, and teaching them (Beatles) songs on the fly. Everyone was having a ball.

I was particularly mesmerized (as I often am) by his backup singers. Not only were they too hot for words, but Aisha Morris,  STEVIE'S DAUGHTER,  is one of them.


I heard that Metallica (who played the night before) was really fun, but I'll catch them next time. Two more artists checked off the bucket list: Stevie and Amadou & Mariam. w00t!

This is a cool photo of the Wine Land's tent. It's just purdy.

I think it's safe to say that last Sunday, August 5th performing the Berlioz Requiem (and several other pieces) was one of the most exhilarating and exhausting musical experiences I've ever had. It's really special to pull off something so amazingly beautiful with 350 other people, with 1700 other people in attendance (check out the standing ovation).

Actually, I would have done it all just to hear the Richard Strauss Sprach Zarathustra, Fanfare (also known as the theme from 2001: A Space Odyssey), which we did, four times. THAT was one of the most thrilling things I've ever sat through.
Watch the video below. There were 13 timpani (kettledrums) and it was absolutely incredible to hear them all get pounded at once. And that major chord they hit at 1:06? Just goosebumps all over... from what wasn't all tingly already. What an absolutely thrill. I was so excited after the first run through at the dress rehearsal I literally raised the roof. I felt like such a huge dork, but I loved seeing all the smiles on everyone else's faces.


Performing the Requiem was equally as thrilling, and totally exhausting. This piece is something like 80 minutes long, and the chorus sings for most of it. As an Alto 2, I got to sit down a couple times, but that's it. And I kept wondering how the folks twice my age were faring. I was physically sore to the core for the next couple of days.

The group of musicians we worked with are the Redwood Orchestra, also a group of volunteers, from the peninsula. They were fabulous and conductor Eric Kujawski was a pleasure to work with. We lovingly called him "The Dude" because of his likeness to Jeff Bridges in the Big Lebowski.

One blogger (one of the 80 choristers that joined us from New York) wrote about one of the funniest moments at the dress rehearsal, Kujawski called things to a halt, saying:

MORE! We need MORE! You, in the back row (of the percussion section), what are you doing standing there! Find something and hit it!!

There's talk about going to Carnegie Hall next year. I'm on the list.

Vote for me to sing the National Anthem at AT&T Park! My aunt Sharon is a huge opera fan, and she told me that Classical Bay Area radio station KDFC is having a little youtube competition to get someone to sing the national anthem before the Rigoletto Simulcast in AT&T Park on September 15th at 8pm.

So I figured why the hell not. I practiced in the car a little bit and then a couple days later I did one take on my computer. It's not perfect, but who cares?

VOTE FOR ME! And you can vote everyday if you want :)

Consider going to watch the Rigoletto simulcast at AT&T Park, it's super fun. You can sit on the field or in the stands and have a picnic. And it's FREE! 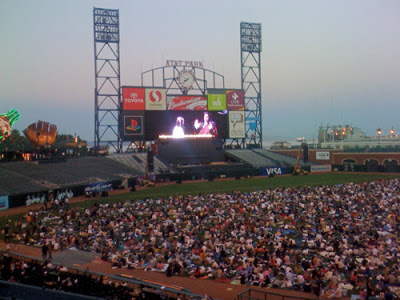 It's been a whirlwind year so far and I've been listening to so much amazing music. Here are just some of the highlights that have fun videos. All these guys have just released new material and are playing live shows this summer, so check 'em out.

Interesting little tidbit I just thought of: all of these bands funded projects successfully on kickstarter.

The Seshen - caught them live a couple weeks ago. Not only are they super nice people, but they are fabulous live. I'm loving the whole album, which you can stream here. Sorta Morcheeba, Erykah Badu-esque with dub step.

Zej and Calen - I just think this video is so sweet. I had the pleasure of interviewing these two on my podcast, check it out here (live performances!). Their music is sweet and thoughtful. I've been enjoying their new record "Last Station" full of love songs, many of them with environmental themes.