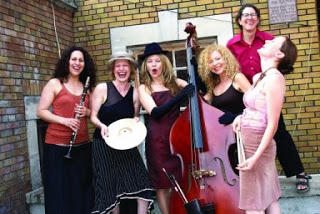 There are so many good shows on tonight in the Bay Area.  I will be going to the sold out performance of the Tallis Scholars presented by Cal Performances in Berkeley.  I've been a fan since college and interviewed conductor Peter Phillips. The article is still online, check it out here. But to quote, well, myself (because I can):

After that I'm heading over to the Independent to check out this years crop of Japanese SxSW bands. Every year, Japan sends about a dozen bands/musicians to the SxSW festival for two nights of showcases.  Then, they go on tour. Japanese bands put on an awesome show, like much of Japanese culture, nothing only goes half way.

Check out the line-up and tour schedule, they might be coming your way.

My favorite band that will be there tonight is detroit7 (I've blogged about them before). I finally figured out who lead singer Tomoni Nabana sounds like: a female Lou Reed(!!!)


Also happening tonight is the Jewish Music Festival's West Coast premiere of the Sister's of Sheynville and Gaucho.

Check out some clips here and at their website.
Posted by Jamie: at 3/28/2009 No comments:

Alright, I know that traditional psychedelic klezmer afrobeat doesn't exist as a genre or even as a logical combination of musical sounds or even adjectives in general, but honestly I have no idea how to explain what this band sounds like.  Just like I said in my last post about Dengue Fever, this band has taken the idea of '"world music fusion" to a whole new non-cheesy dimension.  And I'm diggin' it. (Thank god the 90's are over, eh?)

In fact, the song that I'm adding to my playlist over there on the right called "P'sach Lanu Sha'ar" is a little too African sounding (take a special notice to the guitars and some of the horn lines) and it's freaking me out a little, but in a good way.  But honestly, that should be no surprise considering the band consists of musicians that have played with Antibalas and the Arcade Fire to Middle Eastern percussion bands and Brazilian bands.

I first heard about the Sway Machinery at the South by Southwest Festival in 2006 as part of the JDub records showcase.  But I really took notice when Jeremiah appeared as a featured artist in a documentary about the New York City Jewish Musical Renaissance.  There's one going on, and Matisyahu and Golem are part of it.  I read about this Ethnomusicologist at UCLA that's writing his dissertation on it and there's a class on it, who knew?

As a vocalist, Jeremiah Lockwood is somewhere between Robert Johnson and my great-great grandmother's Belarusian rabbi. Honestly, I'm a little worried that his super stylized vocals might make me a little crazy, I mean I am a vocal snob, I totally admit it. (I'm a singer, I can't help it! I mean it took me a few years to enjoy Robert Plant and Thom Thorke for petesake!) But, he's just so different and the music is so interesting, I'm completely drawn to it.  He's also worked with Israeli and American collabortive band  Balkan Beat Box. Here's a really neat clip of Jeremiah playing some jewishy-blues in the New York Subway.


If you've been reading this blog for the short time it's been in existence, you've probably noticed my love of afrobeat, and the band Antibalas in particular.  Not every afrobeat band can cut it, but if the horn arrangements are there and the different layers lock in, there's nothing better for me. And with Stuart Bogie (Antibalas) on tenor sax, Colin Stetson on baritone sax (Arcade Fire), Jordan McLean (Antibalas) on trumpet, Brian Chase (Yeah Yeah Yeahs) on drums and , I'm sorry, but I'm just going to have to go.

My great-great-grandmother's rabbi would be proud.

Here's their myspace page and their website (download some tracks) check them out.  And see you at the show.