A quick blog from Sydney...

On the 15 hour plane ride down to Sydney, Australia I watched The Visitor on Quantas' movie on demand. This movie is so sweet and sad, but so joyous at the same time.

It's about a ecnomic professor (the Dad from 6 Feet Under and gym manager in the Coen brothers new movie "Burn After Reading) that has lost all vibrancy in his life until he befriends illegal immigrants Tarek and Zainab, a Syrian percussionist and his Sengali girlfriend who bring a new music into his life.

There is mention of Mozart, Fela Kuti, the African djembe, the Chinese erhu, drum circles in Washington Square in NYC and specific African rhythms.

I visited the San Francisco Asian Art Museum last night and, as typical, I parked myself next to the music section in the gift shop and checked out what they had.  After being entertained by some cool Afghan dance music, I found this (watch the video) and knew I had to tell you about it.


I love where the narrator points out that the deity Ganesh is an elephant.  It's no surprise to many people, especially the musician in this video, that elephants can be accomplished musicians.

Read more about the elephants and their "imitation" of music in this article by composer, academic and producer of the Thai Elephant Orchestra records David Soldier.  You'll find the part on the Thai Elephants on page 4.  I don't know if anything can be called musical "imitation,"  but then it depends on your definition of music which is Soldier's whole point.

I definitely call what these elephants do music, but I don't know if I personally would listen to the whole CD at home.  But if and when I go to Thailand, I will gladly pay to see them perform,  but then again I feel that way about a lot of music I see around me.
Posted by Jamie: at 9/26/2008 No comments:

The best Christian Ska in the World: ZAP! 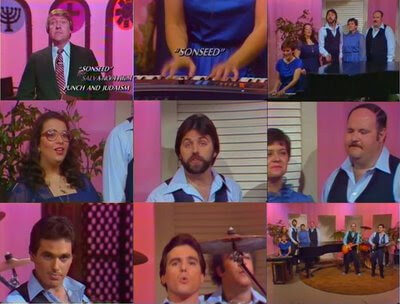 For those of you who haven't seen this video yet, PLEASE do yourself a favor and watch it. I don't care if you are Christian or not, either way, this is one of the best things I've seen in a long time. And thank you to Dougsploitation for finding this in his collection of VHS and posting it on the web.

Introducing Sonseed and their number one hit "Jesus is My Friend": the best Christain Ska band in the world! Too bad they could cross over into the mainstream like Creed or Jars of Clay (who I happen to like). Did you know that according to wikipedia, there are dozens of Christian ska bands. Who knew?

As a good friend said, there is so much to say about this video:

- The hairdo's, clothes and backdrop. I love pink and blue, don't you? The 70s were fantastically pastel!
- The lyrics:

He taught me how to praise my god and still play rock and roll.

He is like a mounty, he always gets his man
and he'll zap you anyway he can.

- The realization that this is actually catchy and the band is totally tight!
- Watch the guitarist. He's totally rocking out.
And last but not least...
- Gotta love those backup singers. Especially the glasses.
- The tv host calling the performance "beautiful" at the end.
For those of you who want more Sonseed, you can download the entire album here. I honestly haven't listened to it yet, but when I do, I will get back to you.

For those of you who want to here some "traditional" British Ska, here's "Too Much Too Young" from the Specials.
Posted by Jamie: at 9/22/2008 No comments:

Antibalas and the Treasure Island Festival

Brooklyn based Antibalas served as my introduction to afrobeat and its Nigerian creator Fela Kuti. I've seen Antibalas perform at least six times since 2003 and they continue to be one of the best live shows around.

I like to dance, but not just to anything, it takes a special kind of groove to get me going.  With a four/five piece horn section and three person percussion section, these guys do not disappoint.

The highlight of todays show was the fiercely political song "Indictment."  Stuart Bogie, took the lead vocal as well as giving musical cues with the energy of one possessed.  Watching him during this number is pure entertainment.

What I really love about Antibalas, and afrobeat in general, is the radical politics that automatically come with the music.  Due to the political life and times of Fela Kuti, afrobeat is aggressively anti-authoritative and populist by definition.  And in light of the Bush administration, Antibalas' message is loudly heard.  The song "Indictment" is not only an awesomely composed and executed afrobeat song, it is politically very specific.  No one in attendance will miss its meaning.

At the Treasure Island Music Festival, the crowd was totally into the song even before the vocals started, but when Stuart Bogie screamed "Condoleezza Rice!  Indictment!" The crowd went nuts, almost taking them by surprise at its forcefulness.  He continued to list "George W. Bush!  Indictment!  Donald Rumsfield! Indictment!  Order in the court!"  But my favorite  of the day?  "Bill O-Reilly! Indictment!"  I would love Steven Colbert to get ahold of that one.

Watch this short clip from the Langerado Music Festival in Miami of the same song.  If I can find a good clip of today's performance on youtube, I will add it.  Check out their myspace page as well as the track called "Takatif" that's in my playlist over there to the right.  I've also added "Indictment" to the playlist for now.

Antibalas is now playing in Fela! A New Musical about the life of Fela Anikulapo Kuti until October 5th off Broadway in New York City. I've heard it's very, very good. 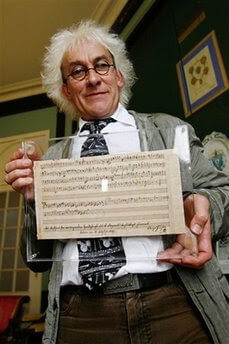 Check out this v ery cool story  about one of my favorite rockstars.  A single sheet of a melody sketch handwritten by none other than the great Wolfgang Amadeus Mozart was found deep in the bowels of a French Library in the town of Nantes.

I love this Einstein-lookin g guy too ( Nantes vice-mayor Jean-Louis Jossic) , don't y ou?  He must be completely over the moon about this. Check out his dorky musical tie!! Love it.
Posted by Jamie: at 9/18/2008 2 comments:

Greg Laswell: "How the Day Sounds" The sad and melodic Greg Laswell has the honor of being my first entry for this new blog.

If asked to describe his sound to folks that haven't heard him, it would  have to be like if Duncan Sheik was the lead singer of Coldplay.  With his painfully sweet lyrics, driving piano rhythms and subtle production quality, Greg's music got under my skin and "forced" me to buy his two albums and E.P. on amazon.


Just this evening, I had the opportunity to see the San Diegan native play a live set at the Cafe du Nord in San Fransisco.  Other than the loud German (could have been Austrian, not sure) girls talking loudly right behind me and talking flash photography, it was a wonderful show.

With just one other musician, an exquisite quitarist whose name I believe is Brandon, Greg played several songs off his new album Three Flights from Alto Nido, which I discovered was the location where most of the songs on the album were written.

I spotted Greg right before his set on the way out for a cigarette and had a nice quick chat with him.  Trying to not sound like a stalker (probably a good thing I didn't mention that I spent a good amount of time watching everything I could on youtube with him in it), I was able to share that this myspace fan site plays almost all of his music in its entirety.  He said he didn't mind as long as people were listening to it.  So you have his approval, don't feel bad that it's free, take a listen.

I first heard the song "How the Day Sounds" on the monthly Paste Magazine CD sampler, a magazine whose musical taste I greatly respect.  And like I said, I was immediately hooked. Because Greg produces as well as makes his own music, his recordings have a sophisticated yet subtle production quality to them.  At his show he described "How the Day Sounds" as the happiest sounding song he's ever written that actually isn't happy at all.  It ends with these lines:

I think I like how the day sounds through this new dawn.
And the lines have all been drawn,
I know where I belong.

Check out the the awesome video starring Greg, guitarist Brandon and great supporter of independent music Elijah Wood, who has his own label, dancing around a grocery store in hipster suits and hats with glass soda bottles.

Moment to listen for:
The cool vocal echo effects on "way down" during the bridge, around 1:35.

October 24, 2008.  Greg's "And Then You" was featured last night on Grey's Anatomy (as annoying as the show is, I can't stop watching it and it DOES propel unknown artists into a new level of success). The album cover was also flashed for a couple seconds at the end of the episode.  It's of course become Greg's most popular songs on itunes.

He's going back on the road, so check out his tour schedule. I already have my tickets back at Cafe du Nord on November 3rd in San Fran.

Congratulations Greg! I see big things happening for you in the near future!
Posted by Jamie: at 9/17/2008 5 comments: