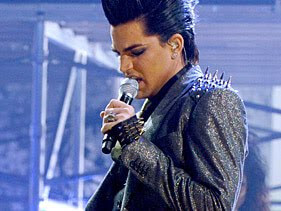 I wasn’t going to broach the subject of Adam Lambert's "coming out" into mainstream pop culture post-American Idol , but after hearing and reading reactions all across the board I had to get my two cents in. I, sometimes painfully, sat through most of the American Music Awards and can’t believe the media is getting their panties in a bundle over this. Nevermind, I can believe it, that’s what the media does. I guess I’m part of that, eh?

In the midst of all this Prop-8 nonsense, I do believe it is the double standard that is to blame. But there are two double standards at work here: that of gender and that of sexuality. As many have said before me the Britney Spears/Madonna kiss was okay with the media. They are both straight women. If Melissa Etheridge pulled what Adam Lambert did, I think there would have been a similar noise. Blatant homosexuality is threatening to mainstream media. This we know.