Listen to the set list: Billy Joel & Elton John serenade me for my 30th 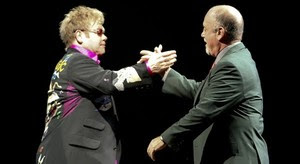 Billy Joel and Elton John have been touring together since 1985


In this world of aging rock stars, it's nice to know that two of my favorites still have what it takes to put on a solid arena show. After postphoning their November show due to illness, it was rescheduled for my 30th birthday. Not a bad birthday if you ask me.

I have been a fan of both Elton John and Billy Joel for years. I sang their music in elementary school and high school choir. I can still recite all of the lyrics to "We Didn't Start the Fire" and I still get goose bumps when "Your Song" comes on the radio.

Billy Joel and Elton John's "Face to Face" tour is the longest-running and most-successful co-headlining bill in music history. Their fan base overlaps and the energy of their music is quite similar. With 40 studio albums and over 80 top 40 hits between the two of them, there is no real possible way this show could have been bad. At 61 Billy Joel still has his swagger (borderline creepy) and at 63 Elton John sounds as good as ever. And both have fingers that have no trace of slowing down over those lovely ivories.

For someone who has appreciated each artist's music separately it was interesting to compare the two back to back. Elton John hardly spoke to the audience, not even to introduce his band, while Billy Joel stopped to apologize to the folks with about being an aging rocker:

"I look at pictures of myself on stage and I say, 'Na, that doesn't look right.' I keep wanting to say, 'isn’t there a retirement age for this job? Then I watch the Super Bowl and I see the Who and I say, "I guess there isn't.'

Later he grabbed an electric guitar for "We Didn't Start the Fire" (I never knew he played!) and then pranced around the stage for "I'ts Still Rock And Roll To Me." The women in the front row LOVED it.

My favorite aspect of the Face 2 Face tour is how the stage is rigged. Having two separate bands, the stage has to accommodate many people. The entire stage is rigged with trap doors and revolving platforms. We were sitting behind the stage, stage right over Elton’s left shoulder, and we had a perfect vantage point watching the various five drummers ascend and disappear into the stage depending on the song.

Musically, I'd have to say that the high point of the night was hearing the guys trade short piano solos in "Bennie and the Jets" towards the end of the show with Elton John's New Orleans steeped style versus Billy Joel's more jazzy flavor coming at the audience in two measure phrases. That was incredible.

Here is a playlist of the set list: what did I tell you, just one hit after another.