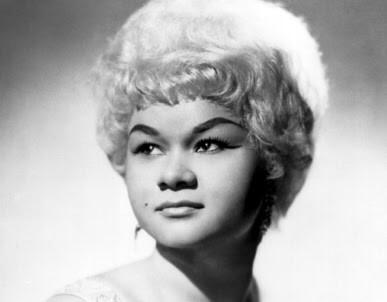 I just like looking at her. She was so unique.

Etta James is, to me, the pinnacle of Soul music. As a singer, she is one of my favorites of all time. She nails the growling as well as the silky smooth. After learning her story and seeing her live she became even more inspiring.


Etta was someone with a rage to live as well as a "rage to survive" (The name of her Autobiography with David Ritz, which I highly recommend). She lived hard and lived surprisingly long for all that she put her body through. As a child she was abused, neglected and passed from one person to another. Her music reflected all this. You can feel it. This was not a person who lacked a story to tell. She didn't lack personality. This is sass in all its glory.


As a woman, she pushed some major boundaries. She was physically relatively large. She had a huge voice that was powerful in its sexuality and passion, something that made mid-century white mainstream America uncomfortable.

As a woman she is inspiring to me, balancing power, passion and femininity. I've realized that I hold most singers to this standard. To me she is perfection. Her music is perfection.

Yes, Etta had demons. And she overcame them, with a little help from friends like the Chess Brothers. While reading "Rage to Survive" I was moved by their relationship. While the biopic "Cadillac Records" capitalized off of this relationship in the Hollywood way, Etta credited Leonard Chess for saving her. For instance she had given him possession to the deed of her home in Compton, so even when she was totally down and out, she still had a place to sleep and had something to call her own.

I know it's cheesy, but this is the song I will be singing at my wedding.

Anyway, I wanted to pay this lovely lady a tribute on the day of her death.

Thank you Etta, for all of your music 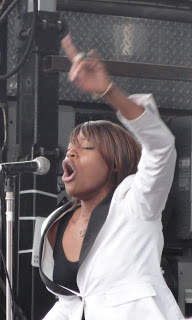 Finally I got to see Fitz & the Tantrums live! I'm also happy to say that I also converted two of my friends over as well who had not heard of them. I, myself, was converted after Amber Gregory's excitement of their Bay Area shows last year. So after finding rockstar parking, we slid over to the Waterloo Records parking lot (they no longer have SXSW shows in the store, which is good news for everyone) and were treated to the funky sounds of Los Angeles based Fitz & the Tantrums.

We found front duo Michael Fitzpatrick and Noelle Scaggs outside Amy's Ice Cream around the corner and had a quick chat, they were as nice as can be. The fangirl in me waited in line to get them to sign my newly purchased copy of their first album Pickin' Up the Pieces.

The music is a sort of reinvention of soul music. It's modern, yet very much firmly based in Motown and STAX. Fitz has no guitar (score!) and instead has a baritone saxophone (double score!) played by Jamie King. The music is fun, but definitely has a certain edge to it, and a good amount of passion and anger. And that's what I think drives it. The performance is super tight and groove-worthy. The vocal combination of 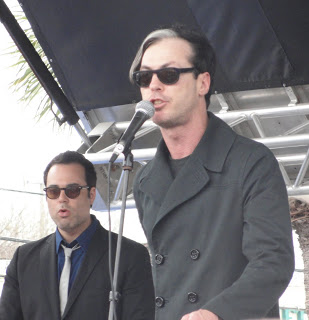 Fitzpatrick and Scaggs is perfect. And although Fitzpatrick has a great voice that suits the music wonderfully, I wish Scaggs would get to sing more lead. But, really, that's my only complaint.

I don't know the history of each of these musicians, but these guys are seasoned professionals that know their stuff. Bassist Ethan Phillips and drummer John Wicks lay down tight, funky grooves and keyboardist Jeremy Ruzumna has chosen the perfect keyboard tones for each song that gives each song a specific personality of sorts.

The song "Dear Mr. President" pleads with (I assume) Mr. Obama, "Hey put your foot down, and take a look 'round, if you don't like what you see." Say it. Hallelujah. And songs like the fabulously catchy "Money Grabber" (see the video below) and "Rich Girls" suggest that Fitzpatrick might have had some specific troubles mixing money and women. I'm really enjoying the dark "News 4 U" with a chorus of call and response between Fitzpatrick and Scaggs that gets in your head.


I took video (including a cool cover of Sade's "Sweet Dreams"), but the amplification was too much for the little flipcam, so I give you their performance on Conan, the late night talk show host with the best taste in music.

I am not meaning to compare Sharon (Jones) to Aretha, but I love both of these woman. Thank you Aretha for paving the way for women like Sharon and thank you Sharon, and her Dap-Kings, for picking it up and funking it out.

Thanks to Milena for inspiring me to post this.