To my readers (and a CD giveaway) 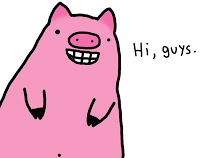 I have a question for you all:
What do I need to do to get you all to start talking back at me? This question is not meant to be a Geeez-why-won't-you-comment thing, but more of a blogger trying to figure out how to make the most of her blog and getting it to be a more interactive place where we can talk about music, which is sort of the whole point...

My posts have not been super interactive and I don't necessarily want to completely change how I do things, but I'd like to try posting more material that will inspire you to share YOUR opinions and YOUR experiences. I know many of you personally, and I think there are folks who read this blog that have found Always More to Hear searching the net I've never met. I would love to hear from all of you! Please introduce yourself!

So I'm going to try some different things and see what works.

I've got some CDs to give away. I'm not sure what they are yet (CDs from my collection and/or mixes), but I'll figure something out. I'll randomly pick a couple folks and send you something.

Tell me: what are you listening to right now and why do you like it?

Maybe post some links so that we can listen?

I'm listening to a Doo-wop box set I bought at the Rock and Roll Hall of Fame back when I was magically stuck in Cleveland last summer. My friend and former classmate Kathryn works there, so I spent the morning poking around. Doo-wop great driving music and just fun to listen to.

There's stuff on there that shows up on the "Stand By Me" soundtrack, like this gem by The Fleetwoods - "Come Softly to Me" 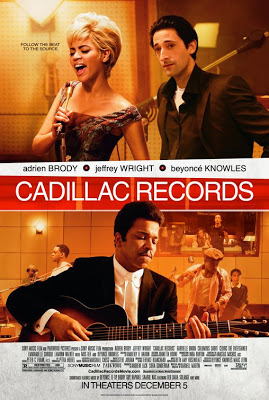 I am a huge fan of biopics. It's very exciting to see the lives of real people illuminated in front of you. Knowing too much about the historical reality of their lives can get in the way however. Hollywood, as we all know, likes to "Hollywoodize" biopics: twisting and tweeking the details of lives to make them more interesting to the viewer.

I figure, you have to get over that. But sometimes it's hard.

Take the movie Cadillac Records: a biopic about the legendary rhythm & blues record label Chess Records. The movie stars Adrian Brody as Leonard Chess, Beyonce as Etta James, Cedric the Entertainer as Big Willie Dixon and Mos Def as Chuck Berry. I enjoyed seeing these notorious musicians come to life, but it was really hard for me to get past some of the added Hollywood aspect.

I cannot help but compare this movie to Dream Girls, but the big difference is that Dream Girls was an intact musical before it was ever a movie. And, even though everyone knows that the movie is based on the record label Motown, it's highly fictionalized.

In the film Etta James and Leonard Chess have an adulterous relationship that challenges racial stereotypes and employer/employee boundaries. As far as I know this is a fabrication, and it bothers me. I wonder what Etta herself had to say about it? I DO know that Etta was pissed that Beyonce got to sing "At Last" at Barack Obama's inauguration and not her...

I was also bothered by the character of Leonard Chess and the ABSENCE of his brother, Phil. It was the Chess Brothers that started and ran the label, it wasn't a one-man operation. But alas, Leonard was the more colorful character. He was a crude-mouthed, smart-ass and the role only brought that out in a very minor way. 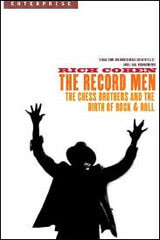 Rich Cohen's The Record Men is a fabulous recount of the Chess story. Leonard Chess is quoted all over the book and his words are something right out of a Mel Brooks comedy routine.

"How to you celebrate a hit? You go to the bank, schmuck!"

"Who knew you could strike it rich with a few schvartzas and a reel-to-reel?

I imagine the producers consciously toned down... scratch that... DELETED the ugly money-grubbing Jewish Stereotype that was Leonard Chess. I guess as a Jewish person I appreciate that, but I still miss the personality. 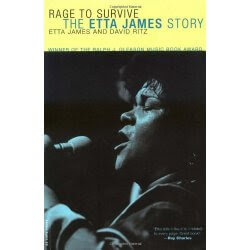 Chess Records has a fascinating story, and while I don't agree with some of the "Hollywood" type additions, I do feel that the essence of the label is treated fairly and with great respect in the movie Cadillac Records. 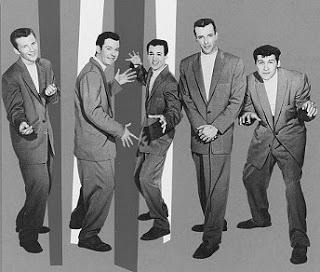 The scene is classic, the song: immortalized. And after a raucous New Year's Eve in 2001, I will never touch tequila again...

In 1957, a random grouping of musicians gathered in Los Angeles to record a group of songs for Gene Autry's record label Challenge Records. Pictured above Joe Burnas on bass, Dale Norris on lead guitar, Dave Burgess on rhythm guitar, Gene Alden on drums and Chuck Rio (born Danny Flores, the son of Mexican American fieldworkers) on vocals and sax.

"Tequila" was recorded last, and was composed on the spot based on a "raunchy" latin tinged saxophone solo written by Flores, the "God Father of Mexican Rock." The song was released as the B-side for "Train to Nowhere" but skyrocketed up the charts to reach #1 in March of 1958.

This group of musicians went on to become the Champs named after Gene Autry's horse, Champion. In 1959, "Tequila" won a Grammy Award for Best Rhythm and Blues Recording. Flores parted ways with the band soon after due to inter-band feuding and went onto form the surf band, the Persuaders.

Even though he signed the rights away to most of his royalty earnings on the song, Flores has been immortalized by his cry of "tequila!" They played it at his funeral in 2006. His wife Sharee said he never got tired of playing it.

In 1986, the song appeared in Pee-wee's Big Adventure when Pee-wee dances his way out of certain death in a biker bar after knocking over dozens of bikes. He finds "Tequila" on the jukebox and borrows a busboy's ridiculous white platform shoes to rock this scene.