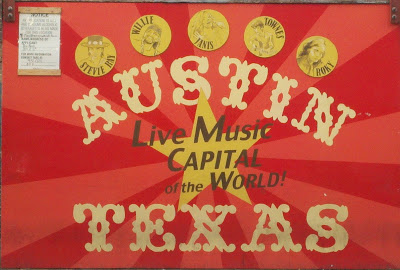 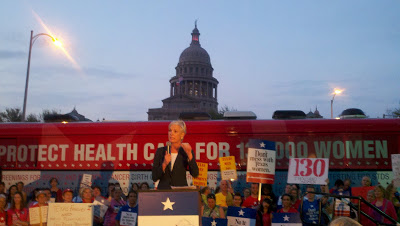 I was super excited to catch a Planned Parenthood Rally right next to the Texas Capitol building (I LOVE that building so much). Texas-born President of PP Cecile Richards made it out for this rally, along with powerhouse Congresswoman Dawnna Dukes. There were performances by Marcia Ball, Carolyn Wonderland, Jimmie and Dale Gilmore.

Pro-lifer Rick Perry has shut down dozens of Planned Parenthoods in Texas, saying "no" to federal money. There were protesters across 11th St., one male high schooler had a sign that said "Don't' believe their lies". It broke my heart a little bit.

And on that note, this is a random sign I liked a lot. 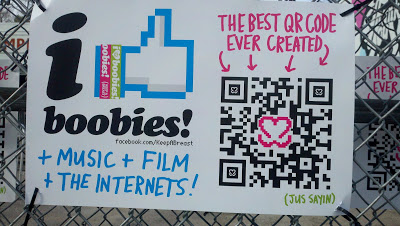 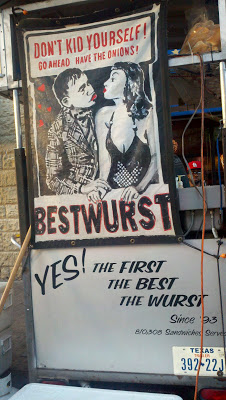 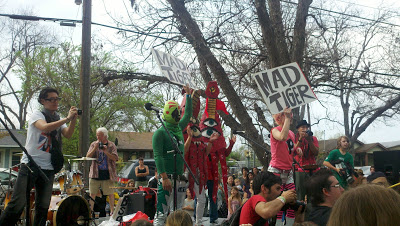 Yes, that is a guitar squid costume. I think someone off camera is climbing a tree.

I went to a Family Friendly show at an Organic Farm with ducks and chickens and saw Mother Falcon (again), and Japanese comic action punk band Peelander-Z. What Awesome fun NUTTY NUTTINESS!

My favorite song? WHY SO MANY MIKE? hahaha. 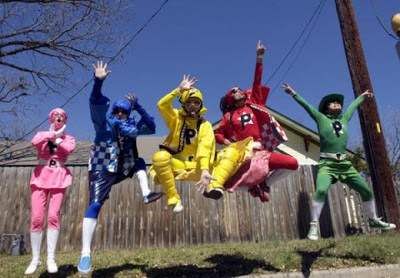 I did not take this photo, but you have to see these costumes.

And then there was my Okie Heights Hootenanny, which was a huge success. The bands had a great time, Elaine and Brian rented a bouncy house for the kids, all of the beer and milk was gone and we raised $500 in tips for the bands. It was great. 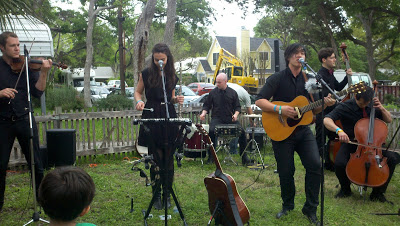 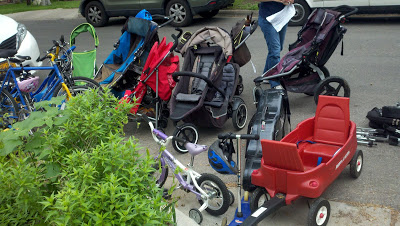 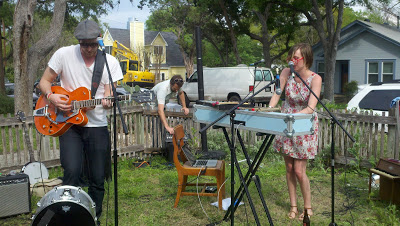 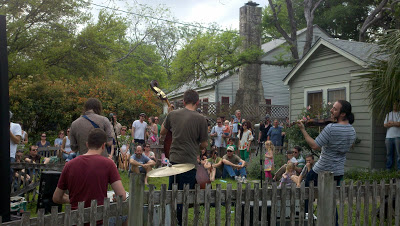 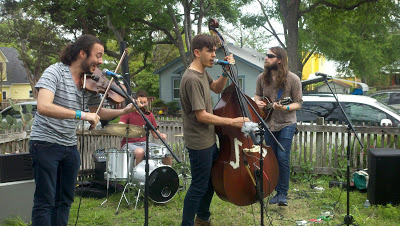 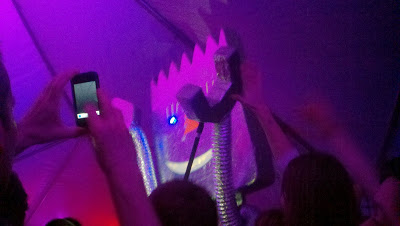 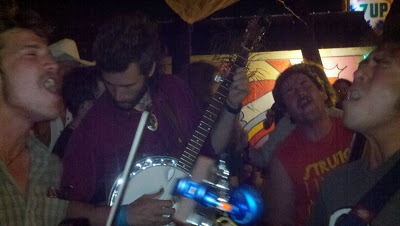 
That's it folks. Jamie's headed to New York City tomorrow morning at 7am. Gotta be up in 4.5 hours.

South by Southwest 101: a crash course

Founded in 1987 the South by Southwest Festival & Conference has grown from a small festival celebrating the local music scene to a full-blown world takeover of Austin, Texas. SxSW has become the place for industry professionals and amateurs to do business, network, and party. Heck, I’ve even got freshly printed business cards for Always More to Hear to give out to people I meet in the hopes of drumming up interest.

Occurring during The University of Texas at Austin’s spring break, the festival overwhelms the city so completely that locals either leave town for the week, stay away from downtown entirely, or dive in to the wave of hipster humanity.

Music, film, and interactive media (web, gaming, computer, etc) industry professionals stream into Austin (over 11,000 of them) from all over the world to attend the conference portion of SxSW during the day and film screenings and musical showcases at night. While the film and interactive portion of the fest are renown, it the music segment of SxSW that has put Austin on the map in the month of March.

Unlike many other contemporary outdoor musical festivals, SxSW showcase performances take place on club stages across town. Temporary stages even pop up in unlikely places like churches, parking lots, lofts, and even Urban Outfitters.

It is completely normal for artists to play a dozen times during the week of SxSW, sometimes only three songs at a time. Artists that are “accepted” by the SxSW careful screening committee get one or two “official” showcase slots. But most bands play at free day parties sponsored by attending record labels, magazines, or other organizations. Bands also play for live radio broadcasts, web broadcasts, benefits and other “unofficial” performances.

Basically, if you are an emerging artist, you want to play as much as possible, even if you are not accepted to play an official showcase. The more places you can get on stage, the higher the chances that you can make a connection with someone who can help further your career.

This year will be interesting for me: after living in Austin for three years and attending SxSW from 2005-2007, I came to the festival wearing a number of hats and therefore experienced it from several vantage points. I have been:

--- a tradeshow volunteer (the stuff the exhibitors give away! If you get shwag and don’t want it, don’t throw it away, give it to me!)
--- a grad student interviewing artists about their experiences for a class project
--- in a band that had an official showcase performance
--- an employee at a hip hat store right downtown.

This year, I’m just showing up with no agenda and no purchased pass (which provide more flexibility with seniority to skip lines). There’s plenty of free stuff. I can also pay the cover for one club and just stay there the whole night. After missing SxSW last year and being very mopey about it the whole week, I decided to make the trip out here to visit one of my favorite cities in the world and hear some good tunes. All I want to do is see good friends who live in Austin and hear some music, hopefully some of it will be good!

Favorite memories of SxSW’s past:

---Every year Japan brings in about a dozen artists for two “Japan Nite” showcases. Generally speaking, they put on the some of the most interesting live shows I’ve ever seen, from mystical punk orchestras, cowgirls with ukuleles and modernized geisha’s with samisens. The bands that come out to SxSW represent the highly innovative and creative Japanese popular culture.

The band detroit7 has been my favorite find so far. They toured the US last year with Japan Nite and will this year as well (coming to a venue near you). With a two women and one man, this music is something like alternative prog rock… whatever, I have no idea what to call it. I’m just so drawn to the lead singers badass presence and sexy vocal quality. See for yourselves: detroit7 is performing at SxSW this year.

--- Being one of the 30 people watching Gomez, one of my favorite all-time bands, play for The Current's live radio broadcast, and then sharing an elevator with them after. I was a dumbfounded idiot, it was awesome. Gomez is also playing at SxSW this year.

---Seeing the bazilllions of hipsters and aspiring rockstars from all over the world prancing down the street in their ultra-hip outfits and hair. I’m such a people-watcher, it never really gets old. These people are keeping the hair gel industry out of the recession all by themselves.


On that note, it will be interesting to see if SxSW is noticeably affected by the recession. Well see.
Posted by Jamie: at 3/14/2009 No comments: