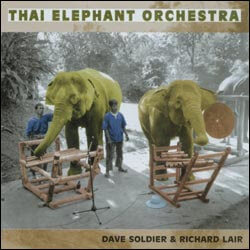 I visited the San Francisco Asian Art Museum last night and, as typical, I parked myself next to the music section in the gift shop and checked out what they had.  After being entertained by some cool Afghan dance music, I found this (watch the video) and knew I had to tell you about it.


I love where the narrator points out that the deity Ganesh is an elephant.  It's no surprise to many people, especially the musician in this video, that elephants can be accomplished musicians.

Read more about the elephants and their "imitation" of music in this article by composer, academic and producer of the Thai Elephant Orchestra records David Soldier.  You'll find the part on the Thai Elephants on page 4.  I don't know if anything can be called musical "imitation,"  but then it depends on your definition of music which is Soldier's whole point.

I definitely call what these elephants do music, but I don't know if I personally would listen to the whole CD at home.  But if and when I go to Thailand, I will gladly pay to see them perform,  but then again I feel that way about a lot of music I see around me.
Posted by Jamie: at 9/26/2008