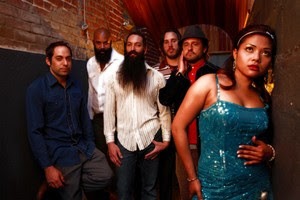 I interviewed Farfisa (keys) player Ethan Holtzman for this story, he's on the left.


Dengue Fever is not just another band from Los Angeles passing through the Bay Area Friday night (they were an answer on Jepordy the other night!). They are carriers and interpreters of an art form from another time, place and represent a community of musicians who died for making that art. I don’t think that they look at themselves that way and I know that sounds a little dramatic, but hear me out:

I sent your Examiner article to a friend of mine who's going to see them tonight in Santa Barbara. I do believe the Independent show is sold out -- good for them!

I know I just saw that! so cool. Thanks for passing on my article Jen!

dude the shite just TORE it up. loved it.

That opening riff just put every Quentin Tarantino movie back in my head.

Thanks! Can't wait to hear more!