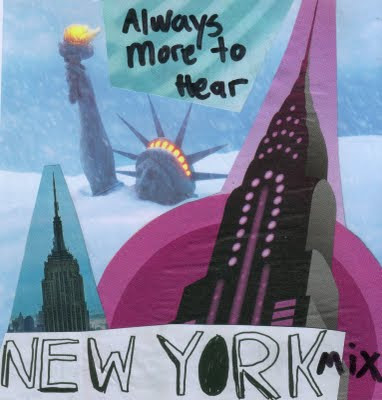 This is a second version of a mix I made over the summer when visiting friends in New York. This time I opened up the track list to songs about the city (while maybe not mentioning it in the title) and the individual burroughs. I have to say, I'm pretty happy with this one. I listen to it all the time!

I collaged the cover as well back in August. It's cute.

Note: I only bought two of these songs from itunes especially for this: the Sinatra and the Busta Rhymes. SO, if you have any complaints here, blame it on the mp3 collection.

Almost made the list but cds aren't long enough:

What would you put on your list? I know I asked this a couple months ago, but feel free to share again.
Posted by Jamie: at 10/14/2009

HAHA. Just kidding...Why would I laugh at you loving Madonna? I love the Backstreet Boys, that's WAY more laughable.