Dent May on Daytrotter and mini-interivew 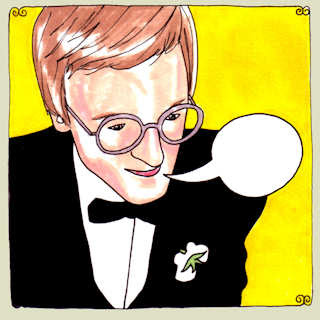 
Check out one of my new favorite artists Dent May and his Magnificent Ukulele on the awesome daytrotter.com. Find sound clips, recorded live for Daytrotter. Also check out my earlier pre-SxSW blog post on Dent.

Mini-interview: I got the chance to say 'hi' to Dent after his showcase at Antone's at SxSW a couple weeks ago in Austin. He's a cute little guy with oversized glasses. I told him I really love his album (it's great driving music) and asked if he had ever been to grad school, since a few of his songs like, Academic Conference, are just too perfect. This is a bit of our conversation paraphrased:

He said, "No, but in undergrad we went to lots of conferences."

"Southern studies, we would usually geek out to Faulkner."

I guess if your Southern, William Faulkner is a major source of pride and joy. Geeks are awesome. Sometimes I miss being in academia.
Posted by Jamie: at 4/06/2009