I am seriously obsessed with Avishai Cohen's "Alon Basela" 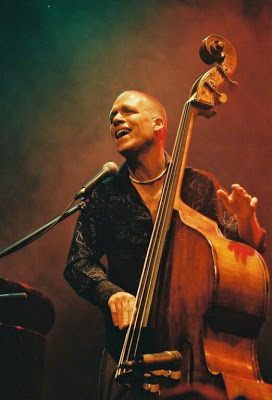 Avishai Cohen is one of the world's leading jazz bassists. He has brought Israeli jazz to the world and Israel to jazz.

The song "Alon Basela" one of those songs that I played over and over again when I first heard it and then get an hankering for time to time.

I asked my Israeli pianist cousin about him and he emailed back:


Avishai Cohen is one of the more known and influential jazz musicians in Israel and also can be credited for bringing jazz music into the general public attention in Israel. He's also an amazing performer and very known worldwide. He was also a part of the Chick Corea trio and played with the most important groups. He's a bit arrogant but that's forgiven..most important thing: he created something that you can justly call authentic in terms of Israeli Jazz.

Also, you gotta love upright bassists that can also sing.

If you click on this video of "Alon Basela," the youtube video is on a playlist and will cycle through more songs on the new album Aurora. It's really beautiful.