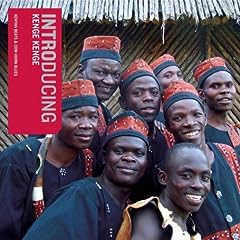 I know some Australians, Canadians and Brits that support Obama (you know who you are!), and I'm enjoying the international support he's getting all around.

These days, it's no secret that the President of the United States has more impact on the international community than any other government official on the planet.  Even though other countries can't vote in our election, we should at least take a notice to what they have to say, or sing.

If you don't watch the whole video of "Obama for Change," let me just at least point out the last verse and the public figures and communities that Kenge Kenge single out as Obama supporters:

It's always healthy to see things from a different perspective and specifically who these particular individuals see as important to them. Something to think about.

In this song, Kenge Kenge play a traditional kind of Kenyan dance music called benga.  It evolved in the late 1940s and 1960s in Nairobi by the Luo people, a ethnic group of people from Kenya, eastern Uganda and northern Tanzania. Perhaps it is not a surprise that Barack Obama is of Lou descent. Benga features the nyatiti (eight-stringed lyre), asili (flute), the orutu (one-string fiddle) and oporo (horn). Benga is often played with electric guitars, but "Obama for Change" is strictly acoustic.

Here is a cool photo album I found of a Kenge Kenge concert at the BBC's Live at WOMAD taken by KayHanPep on flickr.

"Obama for Change" is available for purchase on itunes and emusic and their album "Introducing Kenge Kenge" (shown above) can be purchased at amazon.com.

In a similar vein, have you heard http://uk.youtube.com/watch?v=7PDehlPWsdQ? It makes me smile :D

I'd be down for the Laswell show on the 5th, but I'm not sure how I would get there. I might need a ride ;) Kidding.