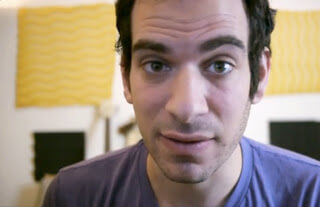 I met Jonathan Mann earlier this year through the Family Crest. I first saw this video he wrote the day after a Family Crest show and I quickly learned that Jonathan is no ordinary songwriter (if that even exists).

Jonathan has been writing a song a day for the last 891 days and posting them on his youtube page. The idea is that if he writes a song every day, yeah, most of them will be mediocre, and some of them might even suck, but there's that small percentage that actually might be pretty good. So he's been writing about whatever pops into his head: Paul Krugman, elves and Maru the cat.

For the month of June, he decided that writing songs is a lonely process and wanted to get some friends involved. So, he ran a kickstarter.com campaign to raise money for a larger song-a-day project that would pay a handful of musicians and eventually lead to the production of an album of songs written during June.

You can also watch the whole process of writing, recording and mastering each song, every day on streaming video here: http://songatron.com/

Read more about the project in this East Bay Express article that ran yesterday.

SO, I stopped by yesterday with Sarah Dabby, violist of the Family Crest and recorded some vocals for "They Double Dared Us" (I come in toward the end). It was a blast and I'm looking forward to stopping by again.

Don't worry too much about the video, these songs fly past so quickly that they just need to get posted. This one might just be a little creepy because Jonathan is just sitting there staring at the camera while footage of his eighth grade graduation runs above him. Oh well, just enjoy that face then. Lol. (And watch the video below it to see some footage of us recording.)

Because the internet is such a useful and empowering tool, the cello part came remotely across the interwebs from Barton Lewis. There are also opportunities (like today) to record yourself singing and send it to Jonathan to be included in the final track.

At the end of the month, we will all be able to vote the songs will be included on the album. I'll be looking to you guys to help get my tracks on it! :)

Here is a video from the behind the scenes, I show up around 1:45 into the video.