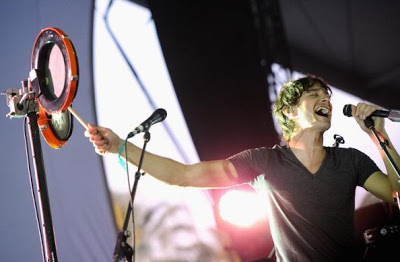 Last night, Gotye performed at the Bill Graham Civic Auditorium, in between Coachella performances, fresh off Saturday Night Live. You can definitely say that the Belgian-Australian artist is the hottest ticket of the moment.

Unless you’ve been hiding under a rock, you’ve most likely seen the sexy and innovative video and heard Gotye’s hit tune “Somebody that I Used to Know” featuring Kimbra covered on Glee, American Idol and everywhere else (Maybe you heard me singing it? I can't stop). What you might not know is that the song is not a one-off, but part of a beautifully written and produced album called Making Mirrors which transfers well to the stage.

Wouter “Wally” De Backer’s song-crafting has grown in leaps and bounds since the 2008 “Mixed Blood”. “Eyes Wide Open”, “Save Me” and surprisingly “State of the Art” are exquisite songs which could easily be released as singles.

Gotye has been compared to Elliott Smith, Sting, Peter Gabriel and I would throw Imogen Heap into the mix, creating a genre-defying, sample-saturated wall of sound. Watching De Backer perform these tunes is watching him switch from playing various percussion instruments, sample –filled keyboards and pushing his voice to unfathomable heights in pitch, volume and timbre. Experimental keyboardist Tim Shiel joyfully plugged away at his set of electronic toys.

The only time I felt the music suffered from too much sampling (the five-piece band also included a guitarist and bassist) was in the soul tunes “I Feel Better” and “In Your Light”. Live horns are always better; sampled horns are sort of sad.

Continue reading my article on Examiner.com

The only reason anyone would compare Gotye to Elliott Smith is because they've copied two of his song titles. There music styles are completely different. Anyone who thinks Gotye is on a level anywhere near Elliott just needs to listen to more Elliott Smith imo ;)