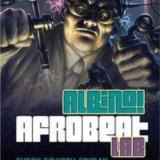 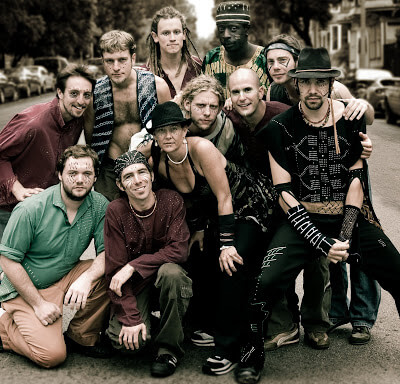 Hey! I love all kinds of music, and play in a samba-reggae all-women percussion band called Batala. I also hope that I am tolerant of self-expression. That said, I am the mother of two children with albinism (the preferred term for "albinos"). I also founded an organization named Asante Mariamu to help people with albinism in East Africa, who are hunted by witch doctors. So, the mixture of proud mama-hood and the Africa + Albino! combination makes me cringe a bit. I doubt the musicians realize how people with albinism are treated in Africa, but it is inhuman. Maybe they can spread the word through their music!
cheers,
Susan.

Hi Susan! I didn't even think about that whole issue while writing this. I learned about struggle of people with albinism when covering a Salif Keita show last year (that man is amazing), so thank you for bringing it up.

Albino! does encourage their community to follow in Fela Kuti's legacy and "take action and make your voices heard" (text from their website) but I don't know if they single out albinism, it would be interesting to research it a little bit to see if they've brought it up at shows.

I think it always depends on the artists' intents. Maybe in this case, it's a matter of homage/tribute versus parody. I would probably react the same way you did when you first heard about the band. But in this case, if I found out their intentions to form the band is out of pure love and respect for the genre and not to openly mock it, I'd soften up to it, especially if they were really good.

There's always a raised eyebrow whenever people of a certain ethnicity or race get into a venue that are stereotypically not linked to them, especially white people. It's kinda sad, but at the same time, there's a long history of racism and open mockery of ethnic culture, so there's always going to be uneasiness about it... at first.

In a completely less offensive yet kinda similar(?) topic, my friends play in a Japanese rock band, they dress up in the typical J-Rock fashion, but they're not Japanese nor are they from Japan. They just REALLY love J-Rock and the culture and fashion surrounding it. I don't find it offensive because I know their intent. But would other people, especially Japanese people, find it offensive that they're a J-Rock band and not their race? I don't know.

truthfully, i wouldn't give it a second thought. here's why.

given SF's diversity, i see no reason to assume that albino! is anything other than the name of a band who has something to say. i'm pretty sure they have no intent on insulting anyone.

this is no different than eminem pulling off rap, and in most instances, better than his counterparts in the genre. he's about as pale as the freshly driven snow. if he can pull off performing in a culture that is not of his ethnicity, why can't these whyite guys make african music?

ignore the fact that eminem *strives* to insult; he's never claimed otherwise. however, he's not fake. his music is real, his talent is undeniable, and he's flat-out good at what he does. he's white, and he raps the shit out of everything he touches.

so if albino! is made up of a bunch of pale guys making african tribal music, and they're doing a good job of it and not insulting anyone in the process, i say let 'em have at it until they give up.

The costumes don't bother you?

It's not the ethnicity of the musicians that bothers me, it's the name and the costumes. It's like so over the top.

Like I said, there's a bunch of American bands (with lots of white people) that play afrobeat, and I don't have a problem with that. It's the name and the costumes.

given that you studied this for so long and know the cultural impact better than I, I will defer to your expertise. as a common lay person, however, they strike me as artists trying to be true to their medium and genre. you know ... if it were up to me, I'd ask to interview the band--see what their deal is. get the scoop! I bet they'd grant one! can't Hirt to ask, right?

If only I had such a forum for said hard hitting interview... lol!

That's a very observant suggestion. I might just do that! Thanks Cam!