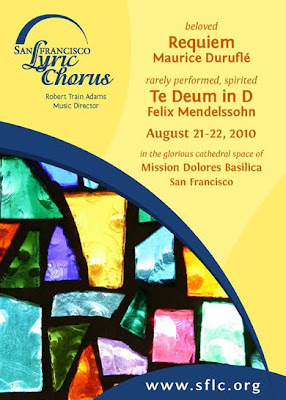 Bach's polyphony has always pissed me off, and now I'm starting to hate Mendelssohn's too.

(Watch out, this post is going to be a little more personally aggressive than usual.)

I just got home from a San Francisco Lyric Chorus rehearsal and I am so agitated I don't know what to do with myself other than rant. The chorus is performing Duruflé's Requiem and Mendelssohn's Te Deum at Mission Dolores Basilica in San Francisco on August 21 and 22. (I will not be singing in this concert because I am in a friend's wedding.)

This is the movement "Sanctus" from Duruflé's Requiem. It's super purdy. I sang this movement in junior high and it just sparkles! (If that makes any sense..)


The Requiem is a commonly performed and beloved piece because of its absolute gorgeousness. Te Deum is not performed very often, and I think I have an idea why: IT'S HARD. Not only is it composed for double chorus (meaning there are eight parts: SATB times two) there are also soloists for each choir. On some pages there are 16 lines of music, so it's like reading a orchestral score. And the publisher of this particular score that we're using is very inconsistent and likes to change the organization of the score every two pages, so your part shows up in a different place every time you move to a different line.

But that's not even the worst part: the worst part is the chaos I feel while I'm singing the faster movements of Te Deum. The never ending lines of quarter and eighth notes make me crazy. Granted, we're still learning our parts, but today I just couldn't handle it. And I think I know why: this music is mirroring how I feel lately, CHAOS.

After this event for my friend Lissy is over (if you don't know, she has cancer and we're trying to find her a stem cell match) on Wednesday, I will hopefully feel better. But with all the other balls I have up in the air right now, the mental energy that I'm using trying to keep them all up there is making me a little nutty.

This is the last few movements of Te Deum. These people make it sound easy.


Back in 2000 when I was studying abroad in Sydney, I was lucky enough to get hooked into this performance of Bach's Mass in B Minor at the Sydney Opera House with a bunch of junior high kids and teachers. There must have been something like 400 people stumbling through Bach's polyphony. No one around me was singing the same thing, so I just sort of made my way through the notes trying to sight-sing and follow the conductor as best I could. I can't even imagine what that must have sounded like out there in the audience.

The experience made me insane and I've had a bad taste for that sort of composition since; and this Mendelssohn is hitting me a little too hard right now. Hopefully as we get more confident in our parts, it'll start to sound divine like those folks up in the video there.

I've always been a tremendous admirer of Bach's vocal works but I have no experience whatsoever in their performance. I don't know if this is related to what you're talking about, but some of those pieces (and the Mendelssohn) can almost give me a jumpy, itchy feeling: everything is harmonized so beautifully, yet it kind of sounds like suffering.

That "jumpy, itchy feeling": You know EXACTLY what I'm talking about. Punk also makes me feel this way. I wonder if anyone has ever compared Bach and Mendelssohn to the Sex Pistols...