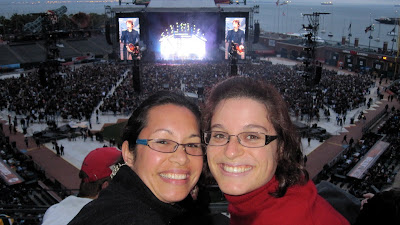 Dead center seats. Photos by Yvette Wild
There’s nothing better than a performer who does a little jig with glee on stage because he is genuinely happy to be performing for you. Beatle or no, a Paul McCartney is certain to please, even if you’re not so familiar with some of his more recent material. The evening of Saturday July 10, 2010 was a cool one, but not so chilly as some Giants fans might have experienced right on The Bay during a San Franciscan summer.

AT&T Park was packed and the energy was buzzing as fans awaited Paul McCartney’s first performance in San Francisco since The Beatles' last concert tour appearance at Candlestick Park on August 29, 1966. McCartney said that things have changed since then, rather than just hearing the screaming girls, we have these “loud things” referencing the ginormous sound system.

I bought the $59 dollar seats, just to see what extra $10 would get me. Turned out to be totally worth it as we were in the View Box in second, row directly over home plate and right smack center.

NOTE: Some people have been complaining (on examiner.com) about a comment I made addressing McCartney's age. It is true that Paul is 68, but what I unfortunately failed to mention is how in awe I am of his energy on stage. He truly is a wonderful performer and a joy to watch - jigs and mumblings and all (I sing and dance and mumble to myself and I'm 30!) The man is adorable and a living legend, wouldn't it be nice to be so totally on your game at that age? What else can I say? 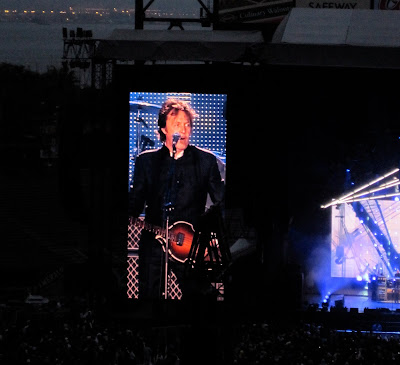 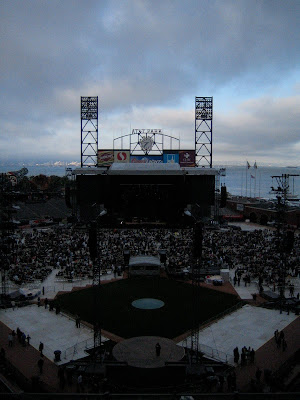 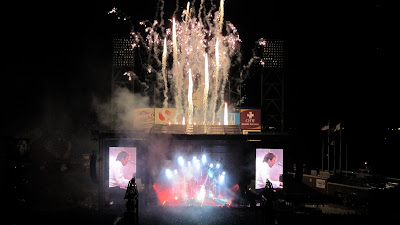