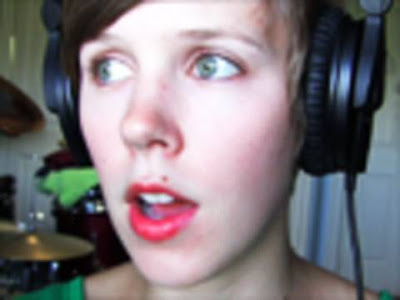 Okay. Soooo, maybe it's about time I tell you all this. Some of you know, some of you probably don't... But I've been working for Pomplamoose for just a few hours a week since the end of December 2009. I've been doing things like helping them with their volumes of fanmail, the t-shirt campaign and getting licenses for their cover songs so that they can actually make money off of them. It's been super super fun. Jack and Nataly are really the terrific and funny people that you see in their videos.

So I'm super excited that they have a commercial out featuring one of their songs. I think that maybe even last year I would have looked down upon this sort of musical business deal, but you know what? How are artists supposed to make money anymore with the internet? They certainly don't do it selling recordings or touring! And it will bring Pomplamoose more fans.

Pomplamoose's cover of "Mister Sandman" originally performed by the Chordettes is currently being featured in a commercial for the 2011 Toyota Avalon. The commercial fits the music perfectly with a quirky 1940s vibe in a train station. Watch the original video here. The commercial has been placed in prime time slots.

Nataly Dawn and Jack Conte seem to be everywhere right now coming right off of airing an interview with NPR just last weekend (listen to the interview and read the article here). Their cover of Beyonce's "Single Ladies" has just passed the 4 million views mark and their cover of Lady Gaga's "Telephone" is striding its way through the 2 millions.

Read more here (cause you know I like the clicks)

This is so exciting! I just saw the commercial pop up on Hulu and was like hey, I know that cover. Hopped on twitter and decided to google it too for good measure... what do you know. Good for them! It is my favorite cover that they've done.

Hey Katherine! Yes! It's super exciting. That commercial is everywhere. It's a cute one too.

If Pomplamoose isn't able to make a substantial amount of money in the next few years, it will be a really discouraging result for such a talented and clever recording act.

Pomplamoose does so many things right, and has so much going for them talent and image-wise.

Home recordists everywhere should be watching the progress of Pomplamose with intense interest.

If Pomplamoose can break thru into real success, it will be a real incentive for other "living-room supergroups" to form and decelop their sound.

Pomplamoose achieving major success could actually signal the onset of a new era in music.

And as many of us will agree----A new era in pop music is badly needed!

Nikto - amen amen. completely agree. They are definitely worth watching and a new era of the music industry is upon us, it'll be so interesting to see where we end up!