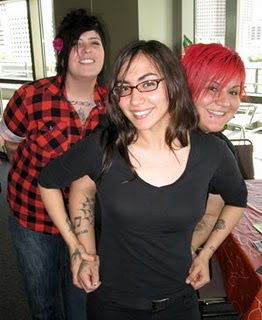 Girl in a Coma will play Girl's Rock Camp's Showcase at SXSW
Rock Camp has been around long enough that it is not just about the girls anymore. While the girl campers who sign up for Rock Camp all around the country (and the world) are the fire that keep it all going, Camp is just as much about the adult woman who support it: whether it be the staff, volunteers or the bands who play.

Girl in a Coma played the Girls Rock Camp 2009 SXSW Showcase and I have been a supporter since. READ MORE ON THE ROCK CAMP BLOG HERE.
Posted by Jamie: at 3/16/2010