Girl in a Coma bringing back the spirit of rock'n'roll, one fan at a time 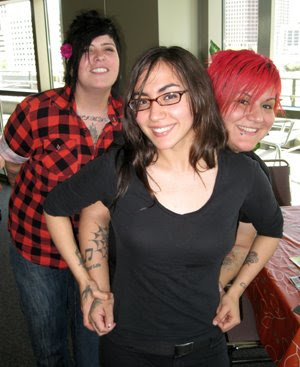 Girl in a Coma is probably the most inspiring band I've come across in awhile. Hailing from San Antonio, these three Latinas have already taken over Texas. Now they're off to conquer the country. And right now they're on their way to the west coast!
I find Girl in a Coma extra inspiring since they are supporters of Girls Rock Camp Austin, Texas, where I first saw them perform.  They have won the respect of Joan Jett, who signed them to her label Blackheart Records and Morrissey, who they toured with last year. To me they embody everything that Girls Rock Camp represents: talented female musicians playing straight up, hard rocking music while being true to themselves and having fun.
Girl in a Coma is sisters Nina (vocals/guitars) and Phanie Diaz (drums) and friend Jenn Alva (bass). Phanie and Jenn played together in high school and were always looking for that last link.  Little did they know that the last link was Phanie's 12 year old sister Nina.  Now almost a decade later, Girl in a Coma has just released their second studio album Trio B.C. named after the Diaz sisters grandfather's tejano band.
I had a chance to catch Nina over the phone while the band was on their way to Philadelphia. I wanted to know what it was like being in a band that represented so much sexually and politically while being a straight up for-the-love-of-the music band. Here are some of the highlights of our chat:
Read the rest of the article and watch some videos on Examiner.com
Posted by Jamie: at 7/10/2009