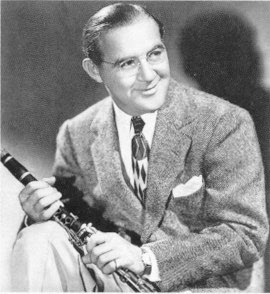 100 years ago today, Benjamin David Goodman was born in Chicago, Illinois, to Jewish Russian immigrant parents with already eight other children. Goodman would later become one of the most transformative musicians and social revolutionaries of jazz history.
He was not only a talented virtuosic clarinetist but also challenged the status quo of civil rights for African Americans by being the first prominent entertainers to lead an integrated band. He hired Teddy Wilson to play in his trio, and later enlisted vibraphonist Lionel Hampton for his quartet. Goodman also brought the popular jazz idiom to a new cultural level by being the first band leader of his genre to play in a "high culture" venue of Carnegie Hall 1938.

Goodman continued performing jazz and classical music until he died at age 77 on June 13, 1986. That same year, he was honored with a Grammy Award for Lifetime Achievement.
Read more of my Examiner.com article and watch videos...
Posted by Jamie: at 5/30/2009