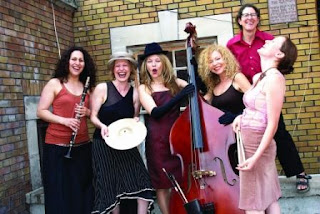 The Sisters of Sheynville
There are so many good shows on tonight in the Bay Area.  I will be going to the sold out performance of the Tallis Scholars presented by Cal Performances in Berkeley.  I've been a fan since college and interviewed conductor Peter Phillips. The article is still online, check it out here. But to quote, well, myself (because I can):

After that I'm heading over to the Independent to check out this years crop of Japanese SxSW bands. Every year, Japan sends about a dozen bands/musicians to the SxSW festival for two nights of showcases.  Then, they go on tour. Japanese bands put on an awesome show, like much of Japanese culture, nothing only goes half way.
Check out the line-up and tour schedule, they might be coming your way.
My favorite band that will be there tonight is detroit7 (I've blogged about them before). I finally figured out who lead singer Tomoni Nabana sounds like: a female Lou Reed(!!!)

Also happening tonight is the Jewish Music Festival's West Coast premiere of the Sister's of Sheynville and Gaucho.