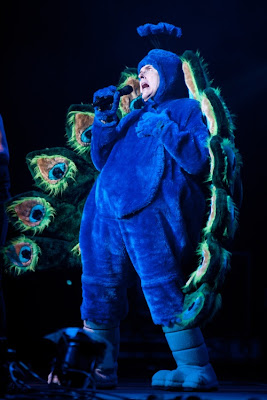 Weird Al performing "Perform this Way" - a Lady Gaga parody in song and outfit. Elton John eat your heart out.
(All Shook Down blog, photo by Jamie Soja)
A wise man (Homer Simpson) once said "Ye who is tired of Weird Al is tired of life".
A Weird Al Yankovic concert is a pop culture orgy. Not only are his songs mostly parodies of well known pop songs, but his shows are brilliantly interspersed with costume changes, fake celebrity interviews and clips of ANY mentions of Weird Al in the media.
I saw Yankovic in 1999, my sophomore year at the University of Michigan, and had a blast. The show on November 6th at the Fox Theater in Oakland was even better. Yankovic is in his 50s, but can do can-can kicks like a young kid. And I'm going to say it, looked pretty good in the leather pants he put on for the Doors parody.
I'm pretty familiar with Yankovic's discography. There were a few tunes I didn't know, but one of the things I really like about this show, is that if you pay attention to mass media AT ALL, this show is immensely entertaining because you catch the parodies. Not only the songs, but the bits between songs as well.
There were clips making fun of Yankovic from Friends, Scoobie Doo, Letterman, Who Wants to be a Millionare, How I Met You Mother... everything, no matter if the clip praised or made fun of Al.
My favorite was a husband/wife dialogue from "Til Death" with Brad Garrett (the brother from Everyone Loves Raymond):

"You never compliment me."
"What are you talking about? I complimented you just the other day."
"You told me I look like Weird Al from the behind!"
"Weird Al has beautiful hair and a tiny ass!"

The celebrity interviews featured folks like Kevin Federline, Madonna, Eminem and Justin Timberlake and were pieced together from outtakes à la Stephen Colbert. Yankovic spiced in questions that made the interviewees seem absolutely ridiculous.
"Polka Face" started the show.

One of the highlights of the show was this moment in the encore, where for about three full minutes in the middle of the fan favorite "Yoda" (to the tune of the Kinks' "Lola"), Yankovic and his band sang nothing but gibberish (except the word "PORK!) with choreography.
Click over to 3:45. You also have to make sure you hear Yankovic ask "Only the transvestites" in the audience to sing the chorus.

After the show, the were giving out these 11x17 posters of the DVD live show. I grabbed one, and I'd like to give it away to one of my readers who really loves Weird Al. Send me an email if you'd like it, first person who emails wins! alwaysmoretohear@gmail.com 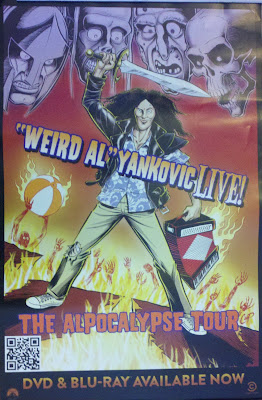 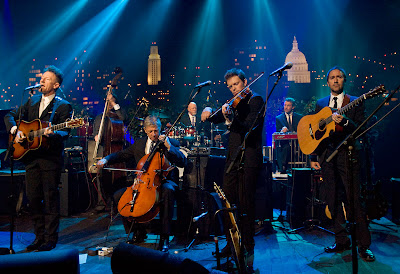 I just came home from seeing Lyle Lovett and His Large Band at The Warfield. And here's the thing: Lovett could put my grocery list to music and it would sound good, that's just how moving his voice is. And not to mention his band... holy shnikeys! (Special shout out to fiddler/vocalist Luke Bulla and guitarist/mandolin/vocalist Keith Sewell) These dudes are insanely talented and a pleasure to see perform.
I actually think I probably prefer the smaller five piece backup band to the "large" band Lovett has played with in the past. This smaller setup is more intimate and seems more old school country/bluegrass to me, something that folks seem to appreciate lately.
I will admit, I did not, and still really do not, know Lovett's music well. I heard about him when he married Julia Roberts and I've seen him appear in the Altman films, but I never got into the music. It's not that I didn't like it, I just never gave it a moment. I even lived in Texas for three years (he's from the Houston area and spends a lot of time in Austin), and nada; don't know why.
Not until 2am last month when I happened upon his Austin City Limits episode, the last one filmed in studio 6A on the University of Texas campus, before the show moved locations. His live show is so gorgeous.
Click here to watch Lyle Lovett perform "Natural Forces"on Austin City Limits, do yourself a favor.
This is the kind of country music you can add to the list that's "okay to like"; you know, the same list on which Johnny Cash and Dolly Parton reside. His music is deep, beautiful, playful and meaningful.
What I also love about Lovett is his deadpan sense of humor and awkward stage banter. Calling out his bandmates and embarrassing them for all their accomplishments like a proud parent, telling bad jokes and drawn out stories of being on the road. He was enjoying himself, and that is always one of my favorite things to witness.
My blog is named upon the idea that there will always be more music to hear, whether it is new, old or from far away. There are artists you will know about and yet one day, their music will smack you in the face (or the ears) and you will have a whole new appreciation for their craft.
This is one of those times.
"Up in Indiana"